Ever heard of a honey bird?  Nasty pieces of work if you ask me because they are all brood parasites that lay one egg in a nest of another species.  Honeyguide nestlings have been known to physically eject their host’s chicks from the nest and they have hooks on their beaks with which they puncture the hosts’ eggs or kill the nestlings.

Honeyguides are named for a remarkable habit seen in one or two species: they guide humans to bee colonies. Once the hive is open and the honey is taken, the bird feeds on the remaining wax and larvae.

They are among the few birds that feed regularly on wax—beeswax in most species. 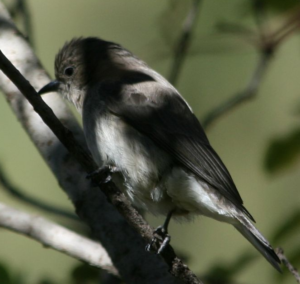